What started the American Revolution?

The typical answers are “taxation without representation” and the economic and political consequences that came with that.

My guest today argues that while economic and political principles all played roles in the American Revolution, there’s one big thing underlying all the causes of the Revolutionary War that often gets overlooked: honor.

His name is Craig Bruce Smith, he’s a historian and the author of the new book American Honor: The Creation of the Nation’s Ideals During the Revolutionary Era. Today on the show we talk about what honor looked like in America during the colonial period, how that concept changed, and how this shift precipitated the War of Independence. We then explore how personal affronts to honor experienced by several of the Founding Fathers at the hands of the British transferred into a feeling of being slighted as a people, galvanizing a collective sense of honor in the colonies and inspiring the fight for independence. We then discuss the role honor played in Benedict Arnold’s treason and how his treachery spurred colonial Americans to go on to win the war. We end our conversation discussing why the sons of the Revolutionary Era returned to a more traditional ethos of honor in the form of dueling.

This show will give you fresh insights on the founding of America.

If you’re like most people, you’ve got a powerful computer in your back pocket that allows you to listen to this podcast, check the score of your favorite team, and learn the population of Mickey Mantle’s hometown of Commerce, OK (answer: 2,473). Our smartphones are a blessing, but for many people they can also feel like a curse. You feel compelled to check your device all the time, leaving you feeling disengaged from life.

What is it about modern technology that makes it feel so addictive? My guest todayexplores that topic in his book, Irresistible: The Rise of Addictive Technology and the Business of Keeping Us Hooked. His name is Adam Alter and today on the show, we discuss what makes today‘s technology more compelling than the televisions and super Nintendos of old, whether our itch to check our phones can really be classified as an addiction, what soldiers’ use of heroin during the Vietnam War can tell us about why our attachment to our phones is hard to shake, and how the reward we’re looking for on social media isn’t actually the “likes” themselves. Adam then shares what he thinks is the most effective tactic for taking back control of our tech, and how consumers may be able to influence the direction of its future.

Personally I think the actual truth lies somewhere in the middle between the hyper-life of the modern technologist and the future will be bleak anti-technologist. It depends almost entirely on not only what man invents but how he chooses to actually employ his inventions/technology.

That being said I am a firm anti-Utopian. I do not believe in the human utopia (not socialistic, not economic, not technological or scientific, etc.) , either that it is possible, or desirable. It is a badly conceived, utterly juvenile and naive, and entirely impractical idea.

By the way, in listening to him, I can’t help but wonder if Nicholas Carr is not in some way related to Caleb Carr one of my favorite contemporary fiction writers.

A few weeks ago, I had futurist Kevin Kelly on the podcast to discuss the technological trends that are shaping our future. From driverless cars to artificial intelligence that will make new scientific discoveries, Kevin paints a fairly rosy picture of what’s to come.

My guest today sees a different side of the coin, and argues that the future envisioned by many in Silicon Valley is, well, kind of creepy.

His name is Nicholas Carr, and he’s the author of several books that critique the wide-eyed utopianism of technologists. In his book The Shallows, he reported on the research that shows how Google is making us dumber; in The Glass Cage he explored the science on why outsourcing our work and chores to computers and robots might actually make us miserable and unsatisfied in life; and in his latest book, Utopia is Creepy, Carr pulls together all the essays he’s written over the years on how the rapid changes in technology we’ve seen in the past few decades might be robbing us of the very things that make us human.

Today on the show, Nicholas and I discuss why he thinks our utopian future is creepy, how the internet is making us dumber, and why doing mundane tasks that we otherwise would outsource to robots or computers is actually a source of satisfaction and human flourishing. We finish our discussion by outlining a middle path approach to technology — one that doesn’t reject it fully but simultaneously seeks to mitigate its potential downsides. 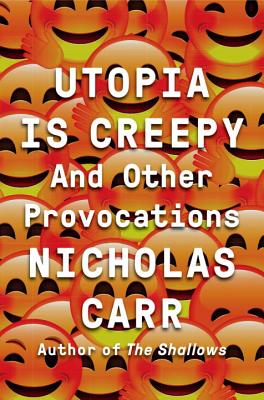 If you’re a bit leery of technology like myself, then you’ll definitely enjoy all of Nicholas’ books. Utopia Is Creepy gives you a big picture look at all of Nick’s ideas on the often overlooked downsides of our unquestioned adoption of digital technology. Pick up a copy on Amazon.

Listen to the Podcast! (And don’t forget to leave us a review!)

Ancient and medieval book worlds. The galaxy before Gutenberg. A bit of scholarship, a bit of humour. By Dr Cristian Ispir. Don't forget to subscribe